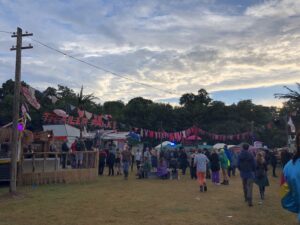 I promise that this is the last Electric Picnic blog. Maybe I am still too excited about it as it has not been on for three years. Sunday had torrential rain forecast, so we decided to head home after the Artic Monkeys. We packed up early and brought our stuff to the car so we could leave without hassle, as the Monkey’s gig did not start until 22.30.

I donned my mad flower hat and was thrilled to happen upon a random and wonderful Mad Hatter’s Tea Party table in one of the fields. We meandered to the Manifesto tent in Mindfield and then spent a few hours lolling around in Body and Soul. The band Cruel Sister was another lovely surprise. 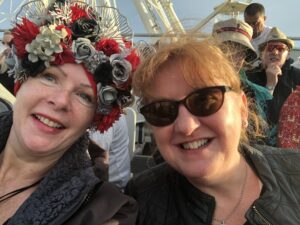 The Coronas were awesome, particularly as the lead singer Danny ‘O Reilly brought his Mam, Mary Black, onto the stage. She sang a few bars from No Frontiers, and I have to say I shed a few tears. His sister Roisin O and the guitarists from All Twins and True Tides supported him. I love that many bands and artists are now collaborating with their peers.

I have never seen a front man overcome with joy and emotion as Gary Lightbody from Snow Patrol. He literally could not stop smiling. They had never played Electric Picnic before, and the crowd were singing along to all of their songs. You could tell that he was completely overcome. The crowd sang two verses of the chorus of Run, and he said that he had never heard a crowd sing two verses in all his years of singing this anthemic song. 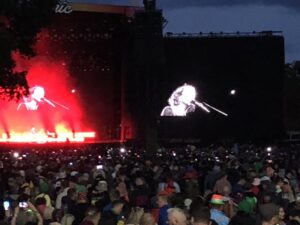 Arctic Monkeys started with Brian and then sang no further hits until we left, seven songs in. I have since seen the setlist on Twitter, and they only played ‘Bet you look good on the dancefloor’ at the very end.

The torrential rain began at 11 pm, and we decided to leave. It was difficult for Artic Monkeys to top The Coronas and Snow Patrol, but I still feel that they could have played more of their hits. I had seen Alex Turner in his other band, The Last Shadow Puppets, in Glastonbury in 2016, and they were awesome. I completely lost it when they played the song, The age of the understatement. He is an awesome frontman, but he did not engage with the crowd at all.

It was and is a truly awesome festival regardless of the rain or the trek to get in and out. I always say that it is the most fun you can have in a field in Ireland.