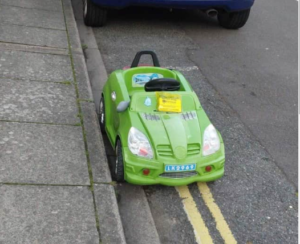 This is a remarkable story that could only happen in Ireland, as I do not think any other country would put up with our shenanigans. Where I swim, there is an area for parking our cars. Behind where we park our cars, three private houses have their own parking. Last year one of the residents shouted at a few of us for parking our cars in the cul de sac in front of his house.

At the time, we were not blocking anyone, but he must have had enough and took it out on us. He began to place three bins in front of the area before their homes to overstate his point.  However, this still left six parking spaces for anyone that wanted to park their car while swimming in Low Rock.

I began to think that the owners of the houses originally painted the yellow lines, and somebody later told me that this was untrue and it was actually the county council that painted them.

A fellow swimmer had met a well-dressed man who had said that in all his life, he had never been asked to paint yellow lines for no parking and then have them painted over. The story goes that all the swimmers were criticizing the residents that were swimmers for having the lines painted in the first place. Perhaps they painted over them as their popularity decreased in Low Rock?