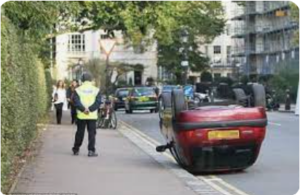 Two weeks later, the yellow lines reappeared, and I can only surmise that the county council painted them back. A week later, they were painted grey again. Over the next four months, the yellow lines were painted four more times, and each time they were painted over with grey paint. I began to imagine the Monday morning Fingal County Council meeting where the secretary would say, ‘Number five on this morning’s Agenda is – The yellow lines at Low Rock, and that everyone around the table would mutter with consternation under their collective breath ‘Oh, Christ, not this again’.

Every time I went for a swim, I could not wait to see if the lines were grey or yellow; it always put a smile on my face. It must be a first for the county council to be at war with residents who had previously asked for the yellow lines to be painted. And, having changed their collective minds, decided against it.

I would not mind, but there is more than enough room for the residents to park their cars and ample space for another six swimmers to park theirs. Swimming brings out the best in everyone. The craic and the banter before and after getting in for a swim is a cherry on top of the salty sea goodness.