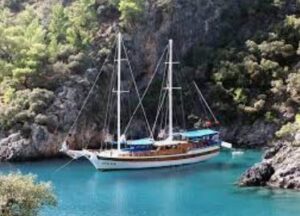 Our sailing trip was worse than the above. But if you are going to get it wrong there is no point in doing it half arsed.  Have a total fail.  As we did.

The genny rope broke and we lost one of the racing sheets which was worth about $400.   We had to backtrack amidst the storm to see if we could rescue the racing sheet which we did.

Again, looking back, it was a miracle that none of us went overboard as we were not wearing harnesses. It was like sailing for dummies. Which we all were.

The next day was the calm after the storm, there was no wind for about 18 hours. We were using the engine and eventually docked at Fethiya.  Which is one of the most beautiful villages I have ever been to.

We were all exhausted after our adventure and glad to be alive. A restaurant was serving fish caught that day and we had such a beautiful meal. The locals were very friendly and accommodating.

We somehow managed to communicate using charades as we were able to relay the story of our storm experience.   Some of us headed off exploring after we docked. We were walking across the mountain and fields when we met a local. ( Contd tomorrow)