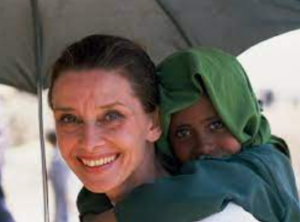 Following on from yesterday’s wordplay in my debut Romcom novel ‘Tara Tree’, a few more have come to mind. If Tara is arguing with Molly, they could be having Breakfast at Tiffany’s- whilst they get over their Tiff? Or, if she is getting her haircut, perhaps Breakfast at Quiffaness? I do realise that I am scraping the barrel here but Anyhoo……

Here is the TikTok reminder of the magnificent Audrey Hepburn

I also mentioned yesterday that it was not Audrey’s style and acting ability that inspired me but her work as one of the original UNICEF Ambassadors. She devoted the latter part of her life to it and raised a phenomenal amount for charity. In one week, she raised awareness and 10 million dollars. She always said that it was her greatest achievement. And like everything, she did it with such grace and humility.

The following are the remaining quotes from Audrey that resonate with me.

-People, even more than things, have to be restored, renewed, revived, reclaimed and redeemed. Never throw out anyone.

-Anyone who does not believe in miracles is not a realist.

-Not to live for the day, that would be materialistic—but to treasure the day. I realise that most of us live on the skin—on the surface—without appreciating just how wonderful it is simply to be alive at all.

-Your heart just breaks, that’s all. But you can’t judge or point fingers. You just have to be lucky enough to find someone who appreciates you.

-Why change? Everyone has his own style. When you have found it, you should stick to it.

-Living is like tearing through a museum. Not until later do you really start absorbing what you saw, thinking about it, looking it up in a book, and remembering because you can’t take it in all at once.

-I tried always to do better, saw always a little further. I tried to stretch myself.

-You can tell more about a person by what he says about others than you can by what others say about him.

– If my world were to cave in tomorrow, I would look back on all the pleasures, excitements, and worthwhileness’s I have been lucky enough to have had. Not the sadness, not my miscarriages or my father leaving home, but the joy of everything else. It will have been enough.

I am off to watch  ‘Roman Holiday’. 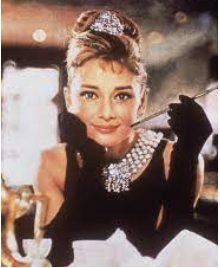 Audrey Hepburn has to be one of my favorite actresses of all time. But not for obvious reasons such as her acting, style and elegance. My next blog will elucidate further.

In my debut Romcom novel ‘Tara Tree’, one of Tara’s housemates pulls a spliff from his pink shorts whilst they are all watching Breakfast at Tiffany’s.

–Breakfast at Spliffanees? He asks everyone before firing up the big boy and laughing at his wit. He then goes on to say

And it would be Breakfast at Riffaney’s if I played my guitar. At this point, everyone tells him to shut up whilst a few sofa pillows fly in his direction.

Here is a TikTok of the magnificent Audrey Hepburn

I recently watched a documentary about her life; many of her peers marveled at her ability to transmute trauma into love. She was a young girl living in the Netherlands during the second world war and scrounging for food. She always said that these memories made her grateful every day for what she had.

The following are my favorite Audrey Hepburn quotes.

Why can’t politics be humanized?

For me, the only things of interest are those linked to the heart.

Elegance is the only beauty that never fades.

Nothing is impossible. The word itself says I’m possible.

For beautiful eyes, look for the good in others; for beautiful lips, speak only words of kindness; and for poise, walk with the knowledge that you are never alone.

The best thing to hold onto in life is each other.

Remember, if you ever need a helping hand, it’s at the end of your arm. As you get older, remember you have another hand: The first is to help yourself, and the second is to help others.

Giving is living. If you stop wanting to give, there’s nothing more to live for.

I believe, every day, you should have at least one exquisite moment.

I am off to watch Breakfast at Tiffany’s.

As Christy Brown, played by the inimitable Daniel Day-Lewis in the movie My Left Foot, said, ‘This was written during my blue period’. Many of my poems were. I find writing them to be a powerful cathartic experience. Here is one of my favourites.

I forget to see.

I do not breathe.

I do not heed.

I am buried in a moment.

I am seeking my unconscious.

But I do not see.

I can glimpse it.

I am almost there.

I will persist in my ignorance.

I play the unforgiving

But in burying my soul,

I am not whole,

I need to begin to feel well.

As the emptiness pervades,

I am the only one that can save

And attempt to feel whole.

For this sadness is not me.

It is not who I want to be.

I am bored with my sad ego.

But I don’t know where to go.

I am better than self-pity.

I am funny, kind and witty.

I will overcome this sadness.

I will face this challenge.

My Everest, my future gladness.

I will somehow realize,

The surprise is me.

The beauty I have within.

The goodness I project.

That tries to have no effect.

I am beginning my soul re- birth,

Of my heart and my soul.

All that I am,

All that I am not,

All that I remember,

All that I forgot,

To exalt my senses,

All that is true.

I shall begin again 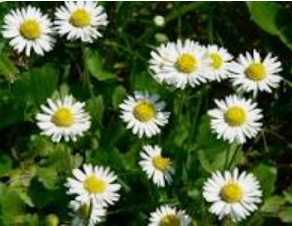 Where did I put my worries?

Beneath my tree unhurried.

In this moment, I am the only one.

Not a care. Not a bother.

The tremendous tree leaves me breathless.

Its branches embrace my spirit.

As I consider how I am blessed,

I nest, bathed in amber twilight.