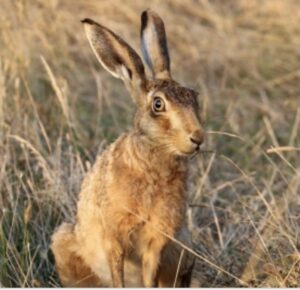 On our last day myself and two friends all witnessed a beautiful brown hair when we looked out of our bedroom windows.  I was staying in a different room which made a lovely coincidence as apparently (according to the owner of the Bed and Breakfast) they are quite rare as they are shy and generally only come out at night.

When I first saw it, I thought that it was a rabbit with unusually long back legs as I am not an expert on the Leporid family which (according to Google) is the name of the family that they are from.

He was bouncing around quite happily and weaving his way around the sheep in the field by our guesthouse before disappearing into another field.  I felt like I was in a scene of ‘Watership Down’. As they say ‘Hare today gone tomorrow’.

I must add that this photo is not an actual photo but he looked very similar.

I initially thought that I should name this blog ‘A Baaad Hare Day’ but then decided to give it a more positive spin.   After swimming my hair did look like I had been dragged through a bush backwards but at this stage I didn’t really care.  The weather cleared up somewhat.   At least to the point where the sky was no longer falling.

We still had three beautiful swims. On one of them I spotted 2 large crabs.  They were beautiful and about the size of a football.  All in all, it was a baaa-ewe tiful Hare Day and I was not crabby at all.