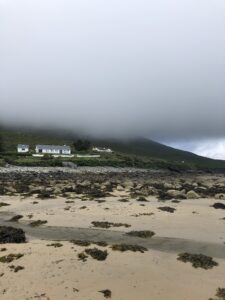 The weather on Achill Island whilst we were there was woeful.   This photo of the house with the sky falling on top of it is actually a completely unedited photo.    It looks like my thumb is over the lens but this is how low the sky actually was on this day.   It was both beautiful and fascinating to witness.

The song ‘Skyfall’ by Adele from the Bond movie of the same name was in my mind the whole time. I began to secretly hope that I might witness a Daniel Craig lookalike emerging from the sea but alas this was never to happen.

Here are some other celebs recreating their own Daniel Craig moment for your perusal. 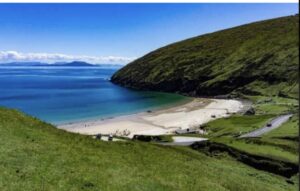 Achill tourism stated that the drive was not for the ‘faint hearted’.  No shit Sherlock. I have completed 3 static line parachute jumps and I can safely say that this drive was as scary as the last parachute jump. I should have worn brown underwear. I seem to have an irrational fear of heights. Where sometimes I am ok and other times, I am almost paralyzed by fear.

Thank God the sky was falling down over the mountain as I drove as I was unable to see the sheer drop.