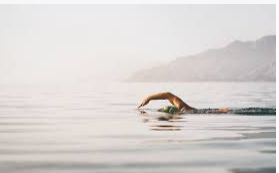 Today was my first sea swim for 2 weeks since my hypothermia episode.  It was 13.5 degrees in Dublin today, a difference of 11 degrees from two days ago. The sea was cold, but it was still blissful.

A giant dead seal was washed up on Portmarnock the other day which caused a lot of disturbance. The birds were circling and dogs were also attracted to it.  I can only guess that it must have been hit against the rocks throughout the course of the storm last week.

At least 2 feet of sand has been eroded from velvet strand in Portmarnock. It is now more ‘rocky’ and ‘stone’ strand.  Let’s hope the coming weather will bring the lovely sand back.

I believe that Katherine Hepburn swam in the sea every day up until she was in her 80’s. She claimed that ‘the bitterer the medicine, the better it was for you’. I tend to agree.

Although I gather that non sea swimmers are getting fed up with the popularity of people hurtling themselves into ice cold sea water. (WPA-Woeful pun alert) There has been something of a back splash with non-swimmers hurling waves of witty remarks towards sea swimmers.

The pier pressure has not gone unnoticed. However, my favorite response to the naysayers would have to be ‘Please excuse my resting beach face as I go about my day swimmingly’.