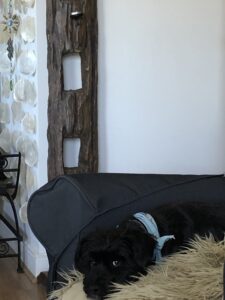 I am sure that many other dogs are like this, however I still feel the need to share with you what Finn has been up to most recently.   Lately he has been running up to bigger dogs and barking at them.

As soon as the big dog barks at him or even just attempts to run after him he literally runs away with his tail between his legs yelping as though he has been assaulted.  It is quite funny to witness as he does approach the dog with so much bravado and then within a few seconds he’s running away.   Hence why I have him called ‘Finny Big Bollix’ in such events.

Earlier on when I woke early Finn was snoring away beside me.   I tried to capture his snores on video to post onto TikTok but Murphy’s Law kicked in.  As soon as I switched on my video the snores would subside.  My attempts at gaining the ‘Money Snore’ were all thwarted. When I do, I will blog post it.