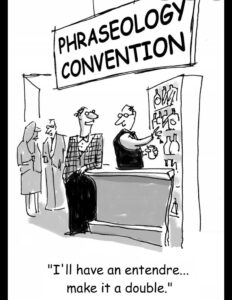 (Homonym’s and Homograph- How many can you find?)

I was being fair in describing him as fair. Pat had skin that was almost translucent. He was Irish and I met him at the fair. He left me for a minute and returned with a minute ceramic leprechaun that he had won at a stall.

His friend Liam passed by and asked him to stall as they had had a row in the bar the night before. Apparently,they had stolen a boat that had no oars and therefore they had nothing to row with.

It turned out that the publican of their fav bar owned the boat and decided to bar them both. Pat wanted to finish the last drop of his drink but couldn’t as the publican punched him for stealing his boat. He showed me the wound by his ear and was fierce wound up by the assault.

Liam was looking for the Waltzer’s and Pat directed him towards them. We headed towards a tree and sat down. I told him that if he was looking for a shift (Irish slang for snog) that he was barking up the wrong tree.