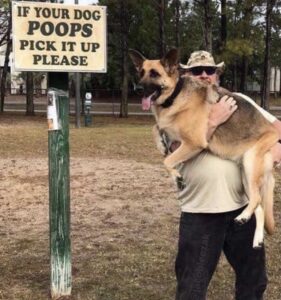 Today I was reminded of an incident in Howth whilst walking Buzz and Finn last week with my friend that made me smile. I was walking up Howth Hill and Finn had a small dose of diarrhea which needed tending to as some of it went onto his back leg. I had a tissue in the pocket of my coat which I took out and began to wipe the smear off the back of his leg.

Whilst I was down there, I also decided to give a little wipe to his tail end. As I completed the act whilst standing up, I became aware of cars driving past. I realized that there was a distinct probability that someone in a car had the misfortune of witnessing me wiping my dog’s arse with a tissue.

Last week there was another incident regarding Buzz. I was with my friend and again we are walking up the hill when a couple of ladies passed us by. My friend was walking Buzz for me as I had Finn. Buzz pooped. There was nothing odd about the event other than the fact that I picked it up and bagged it.

Again, I couldn’t help but think of what the two ladies were thinking. Probably something along the lines of ‘My, now, that’s true friendship, where she picks up her friend’s dog’s poop’, not realizing that it is my dog.

Perhaps I should have apprehended them to explain the situation but I am pretty sure it would have only made things look weirder than they already were.