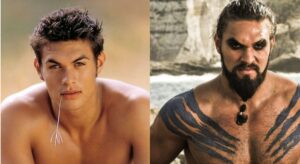 I seem to be on a roll with Jason Mamoa since yesterday’s blog.  In that I dreamt of him last night and we were rolling around……. Nah, I just made that bit up.  But I am intent on manifesting the dream for tonight.

Here are some fun facts about this real life He God.  Jason Mamoa began his acting career in the late 90’s early 2000’s  in ‘Baywatch’ as a lifeguard.   He is Hawaiian of mixed European and native American ancestry.

It took him many years to shake off the image of a lifeguard and be taken seriously as an actor.   In the meantime, he studied marine biology which was a perfect degree for the man that would soon become famous for being the most perfect depiction of ‘Aquaman’’. ‘

Playing ‘Khal Drogo’ in the 2011,2012 first two seasons of ‘Game of Thrones’ was the role that launched him into superstardom. Apparently, he performed the ‘Haka’ in his audition.   Then came ‘Aquaman’ in 2016 which is due to be followed by ‘Aquaman and the Lost Kingdom’ in 2022.

‘Guinness’ is his preferred beverage of choice which thrills the Guinness Family as they could not ask for a better brand ambassador.   From an early age he studied Buddhism and practices meditating daily.   He loves comedies such as Saturday Night Live and would love to appear in one.   I am sure that we will see him hosting pretty soon. I am off to prepare for my night time dream of Jason Mamoa.