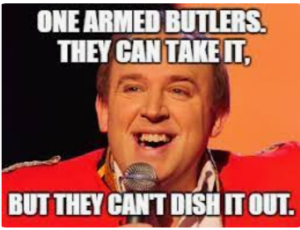 Here are some silly jokes that have tickled me lately, which are more than welcome as they have helped me over my temporary Decemberitis.

One armed butlers. They can take it, but they can’t dish it out – Tim Vine, Comedian and Godfather of one-liners.

A few decades ago, we had Johnny Cash, Bob Hope and Steve jobs. Now we have no hope, no cash, and no jobs. Please don’t let Kevin Bacon die

Who discovered we could get milk from cows, and what did he think he was doing at the time

I like the Pope. You know the white thing on his head? If you push that down and twist it. It is full of sweets

My mind has morphed into animal puns and jokes for the last week, and I am desperate to stop, as it is just not funny anymore.

Depeche Moooood, if ever a herd of cows wanted to re-imagine the greatest 90’s synth rock band?

Do cows ever get into Moods? Moo-ds

When a panda pees, is it pandemonium? Panda, ammonium?

If cows had phones, would they be called a moobile?

If the Sesame Street cookie monster and a dog were crossed with each other, would it be called a Cookie Dough -Berman pincher? (Doberman….)

If a sloth was to become a private investigator, would it be called a stealth sleuth sloth? (Try saying that quickly or after Christmas dinner).

You may be relieved to hear that I will now step far away from the bad jokes.