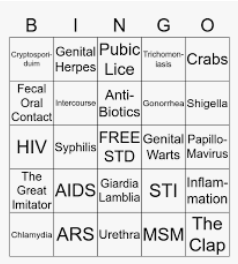 Running on from yesterday’s theme of bingo I was reminded of a story I was told when I was living abroad.   I was studying and one of my fellow students was a clinical teacher for a large airline.  She told us that one day she was giving a class on STDs to new cabin crew recruits. They were all very young, from all over the world and very keen to begin their new exciting career.

She began to go through the various STDs with a key focus on lifestyle and prevention.   She first started with chlamydia.  The first power point slide appeared and she was about to go through it when one of the cabin crew put her hand up. She eagerly announced to the teacher and her fellow classmates ‘Yes, yes I had that one ‘.

My friend then went on to try to discuss Trichomoniasis and the same girl put her hand up eagerly and announced to the rest of the class again ‘Yes, yes I had that one as well ‘.

Perhaps she thought that there was a prize for the person that had the most. My friend thanked the girl again for sharing and then said to the rest of the class that there was no need for anybody else to share.  As far as giving clinical STD induction classes go it was one that she would never forget.