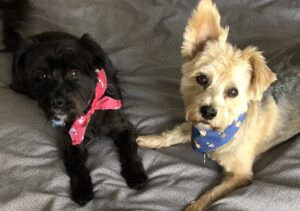 I got a letter today from The Canine Union and Federation of Ireland regarding unequal cuddling.  It was a shock to say the least as I am always conscious of giving as many cuddles to Buzz as I do to Finn.

The problem is that Finn is a cuddle monster and will always paw my hand as soon as I have stopped patting him.  As if you to say ‘I ‘ll let you know when my cuddling quotient has been reached (which is never as he is relentless and also very difficult to resist).

Buzz on the other hand is less cuddly but as I have mentioned before he has seriously upped his game to rival Finn’s affections.  He was never a fan of belly rubs but lately he lies prone in the morning demanding one.  He has an irresistible belly.

I will definitely need to be more mindful of the possible unequal distribution of cuddles on my part.  I am spoilt by both of them.  Buzz has taken to licking my ankles of late which is such a treat.  Maybe that is why he reported me?  As he is putting more hours in and not getting the correct amount of cuddles in return?

Whenever they both meet strangers, they go mental to be patted. It’s very cute but could also intimate that they are seriously cuddle deficient at home? It’s been a woof day. Now, where is Buzz as my ankles need licking.

Here is a nice funny doggie video for your perusal.