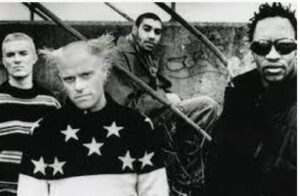 This is my favorite Prodigy song.   From the eponymous ‘Fat of the Land’ album.   A number of the songs from this album were used in the movie ‘Hackers’ with Angelina Jolie and Johnny Lee Miller.  ‘Music for the jilted generation’ was its predecessor and saw them gain global acclaim and recognition.

Walter Stern directed the video as well as Firestarter, Bittersweet Symphony by The Verve and Massive Attach Teardrop. Some of the greatest music videos of all time in my view.

I had the very great pleasure of seeing The Prodigy play at Electric Picnic a number of years ago.  Their music is visceral for me. I relate to their raw energy and anti-establishment stance.

Apparently, they refused  to appear on Top of The Pops as it was too commercial which was a very brave move when they were starting out.  I never realized that their style is known as electronic punk. ‘Godfathers of rave’ was a term used to describe them which to me is a perfect description.

The track ‘Smack my bitch up’ was banned around the world as people believed it glorified male to female violence.  The song actually refers to a guy injecting his girlfriend with heroine.  As ‘smack ‘is the slang for heroin. The following clip is an orchestral version of Voodoo People.

In the following clip Keith Flint and Richard Russell discuss their perspective on the lawless rave years.

The rave years with Keith Flint and Richard Russell

I wonder if they will ever replace Keith?  It would be a very challenging task as he was so talented and unique. Here is hoping.