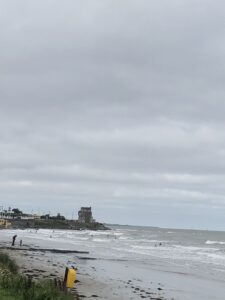 The sea was cold today. But as always, invigorating. Once or twice, it has been so cold that my skin stings but thankfully today was not one of them. I let Buzz and Finn loose, and they were ecstatic. Whilst picking up Buzz’s poo from the pebble beach I had to pick up a few of the stones that it had landed on as he had done quite an effective stone smearing job.

It reminded me of a story when my brother, his wife and their young children went on a picnic to the beach. They had to scale a bit of a cliff to get down to the beach. At the end of the day, they packed up and headed back up the cliff to their car.

When my brother reached the car, he was perplexed as the backpack he was carrying was very heavy. Having eaten their picnic he had thought that there would be less weight to carry back up to the car.

He remarked to his wife’, Crikey,   what have you got in here? rocks?’. She didn’t reply as she was getting the children into the car. He asked her again. She peered over the roof of the car and said, ‘No, I don’t think so, have a look’. He opened the bag and it was full of rocks.

His beautiful wife was in stitches when she recounted this story to me.Just as she was on the day, she filled the bag with rocks.  My brother was able to laugh about it too but it may have taken a little time on the journey home for him to get the joke.