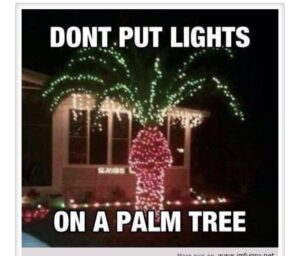 When I was a nurse training in Ballinasloe there were two night clubs that we always frequented.  The Palm Club and was in Hayden’s hotel which was very well known for many many years but is sadly no more.  The other was the East County – less well known- which was in the East County Hotel.

Our weekly frolics were best described as heading to ‘The Palm for a man’ and ‘The East for a beast’- a phrase coined by my good self. Following a night on the beer, boogying and throwing shapes we would all then head to the local Burger bar which was called Mighty Bite. However, we had to rename it to Mighty Shite as the burgers weren’t the best. I was a woeful word play artist even back then. Just couldn’t help myself.

There were two giant artificial palm trees outside The Palm Club where love stories and shifting began.    They must have been 6 feet tall, weighed a ton and one of them got pinched one night.

I often think what the thief’s must have said to the Garda if they had been apprehended.? Would they have remarked when asked ‘What have we here fellas, what’s with the palm trees?’

‘Sorry Garda but the two girls we were with would only promise to shift us if we brought this back to their back garden’. They were never returned- the palm trees- and we all really missed them.