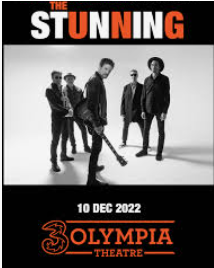 When I returned to my seat, two couples had arrived late and were sitting together two rows down from us. One of the girls got up to go to the bathroom, and I admired her jumper. It was a black batwing with star-shaped sequined patches on the shoulder and upper arm. I enjoyed watching the antics of the two couples down for me as the guy on the outside was extremely exuberant in his dancing. The other guy at the end of the two couples did not appear to want to catch this guy’s eye. He was gesticulating and pointing in an attempt to get his attention and share his exhilaration. It made me smile as I thought that perhaps he found his friends dancing embarrassing.

The ecstatic dancing guy was wearing a multicolored shirt with a paisley design and superman style glasses. Later on, while dancing, he took the hand of his male friend from behind the two women and kissed it. They both laughed. It was such a heart-warming display of friendship. When the gig finished, we all trooped down the stairs to the cold outside. My friend checked her pockets for her phone and realized that it was not there. She raced back to try and find it. The paisley shirt guy had picked it up and was handing it into the cloakroom. The night ended on a high as we danced back to the car park to head home.