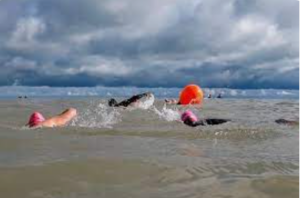 The sea was Baltic today.

-Of course, it was, says you; – What in God’s name did you expect it to like on November 20th? Did you possibly expect it to be balmy?  Did you think you would need to cool down after it?

I know I am mad to do it, but that is my favourite part. Oh, and when I get home, I feel bionic from the endorphin aftereffect.

Somebody once wrote on Twitter that they spotted a pod of endorphins swimming off the coast of Skerries in North County Dublin, which is an expression I love.

As I was getting out of the sea, somebody asked me what it was like.

I said- Ah, sure, once you get down and swim around for a few minutes, it’s still fecking freezing, which made him laugh.

Having experienced hypothermia in my first six months of sea swimming through my first winter, I am once bitten and twice shy. I dried off and wriggled into each thermal layer as quickly as possible: five layers in total. I then shimmied up the steps and into my car, where I turned the heat on full blast. The thoughts of a nice hot cup of coffee when I got home kept me going.

Once home I got to my bedroom to be greeted by a frantic Buzz and Finn who performed their perfunctory forensic sniffing test to ascertain where I had been and to see if I had been fraternizing with any other dogs. Their greeting is always the cherry on top of the bionic swim.