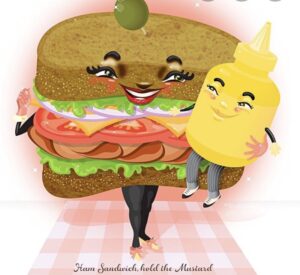 This afternoon I was rinsing my swimming shoes in the kitchen sink to remove the sand from an earlier swim.  The sea was freezing but still refreshing.  I had always harbored (excuse the dreadful pun- pun therapy continues, but is largely unsuccessful) the notion that if you swim fast enough and for long enough- in my case about 10 mins- that you will stave off the cold and warm up. It is not true as the sea is still feckin freezing.

As I am new to sea swimming in the winter, I have convinced myself that I am burning more calories by being so cold. Buzz and Finn were at my ankles looking for treats. I inadvertently knocked a bowl containing a cooked ham joint which was cooling by the sink directly into the sink. I placed it on the cooker to be safe. Silently I said ‘Whew’.

Hunger got the best of me following my swim. I was looking forward to a ham sandwich with lovely fresh rye bread that I had bought from a new bakery that had opened. There was no mustard and I began to look for mustard powder. Finally, I found the mustard powder and in retrieving it from the cupboard knocked the ham off the cooker to the ground.

Things for me happens in threes – good and bad -. I have figured that I now probably manifest this in that it has become a self-fulfilling prophecy. Buzz and Finn went feral on a ham fest. I did manage to rescue some from the floor and rinsed it in the sink, using the 30 second rule. I made my sandwich, got my apple- which I then dropped, therefore fulfilling my rule of three’s.

I sat down and took a big bite of my ham sandwich on rye and smiled wryly. It had sand in it.  From when it had fallen to the floor in the kitchen. I had always wondered where the phrase had come from and now at last, I understood.

I can’t say I was thrilled at the revelation as the sand gritted my teeth removing part of a filling. But there you go. I have since enlightened myself by learning that the sandwich is named after the 4th Earl of Sandwich-John Montagu who needed a handy meal without forks whilst playing cribbage.