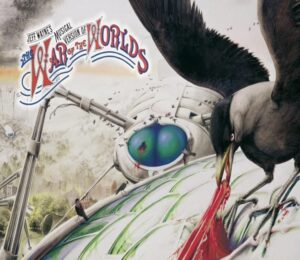 The other morning, I overheard somebody playing Jeff Wayne ‘War of the Worlds’ in one of the apartments nearby. Richard Burton was narrating. His voice makes me melt. My windows were closed at the time so the volume was obviously quite high. It was quite apocalyptic. Particularly as I had been singing ‘Oh what a beautiful morning’ from the Oklahoma musical as I made my breakfast. I had looked it up on YouTube to remind myself of the lyrics to the second verse. Which, by the way, are quite beautiful and rather poetic. Here is the link to ‘Oh what a beautiful morning.’

I smiled wryly at the juxtaposition in that if it was going to be the end of the world, at least I was having a lovely morning. I remembered where and when I was when I first heard War of the Worlds.    I must have been about 12 when my brother came back from his world travels whilst working in the Navy.

He brought back so many cassette tapes which he had bought for fifty pence each in South Africa.  Everything from ELO, to Blondie, Peter Gabriel, Queen, Super Tramp and War of The Worlds by Jeff Wayne. He also had a huge Hitachi boom box with massive headphones. loved going to sleep with the headphones on listening to this track. To this day my brother’s musical selection has informed my musical taste.

For the last week I have not been able to get the song ‘Oh, what a beautiful morning’ out of my mind. Considering I have not heard it in decades. Anyhoo, tonight on   ‘I’m a celebrity get me out of here’,   guess what happened?    Russell Watson burst into song, singing, none other than ‘Oh, what a beautiful morning’. There are 97 million songs in the world.   Well, at least, there was the last time I counted them. And there was I singing a rather random one from a movie called ‘Oklahoma’ made 65 years ago. And apparently so was Russell.

So, I am inclined to favor that tomorrow will be a beautiful morning and possibly not the end of the world. I must apologize as I believe I may have incorrectly counted the number of songs in the world.   The number may be in the region of 98 million. I’m off to count them again and I will get back to you.