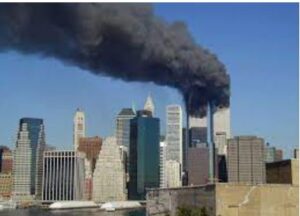 As this year is the 20th anniversary of 9-11, I felt the need to watch a documentary about the horrific events of that day.   I watched the National Geographic series on Netflix which featured testimonials of survivors.  It is still hard to believe what really happened.   The completely unnecessary loss of life and the mind-blowing heroism.

One of the stories that stayed with me was of a man who helped a woman out of the building.   The woman was blinded from severe burns.  The man helped her out of the towers by guiding her down the stairs.

When they were out and in safety the man got a call from his brother-in-law asking him to see if he had heard from his sister.    He said No.   It transpired that she was in the plane that hit the second tower with her son as her brother was helping the lady down the stairs. It still gives me goosebumps when I think of it.

Everyone remembers where they were and what they were doing that day.  It appears to be no different to when JFK, Martin Luther King, Marilyn Monroe and Princess Diana died.

The event is indelibly carved into our memory.  I was boarding a plane from Newcastle to Bristol and was waiting at the gate when it appeared on the television.  I thought-as a lot of people did- that I was watching a trailer for the film ‘Independence Day 2’. After a few moments I realized that what I was witnessing was real life and not a movie.