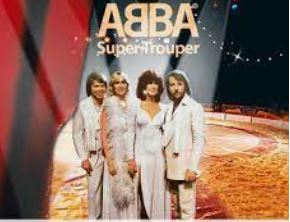 I must be manifesting cherished memories of my youth as this clip came up on YouTube when I had been talking about it the previous day.  It was released in 1980 and I got the album in my Christmas stocking.  If I recall correctly, I believe I cried when I received it.   I played ‘The winner takes it all’ non-stop for 6 months.

ABBA are one of the most famous bands in the world and have sold 150 million records, which is pretty phenomenal.  To put it into perspective George Michael sold 50 million.

When their re union was announced last month it sent the world of music into a tail spin.  Over the years I have managed to resist watching the movie ‘Mamma Mia’ as I heard that it was woeful and I do not want it to sully my love of ABBA.

The fact that they are building a stadium in Stockholm and that Ben’s son has produced the show to feature the four members as holograms is a master stroke.  The ABBA Museum is famous enough but to visualize a Vegas style arena where anyone can see the famous four in concert-albeit as holograms- is innovation on another scale.

I can only imagine that it will be the top destination for Hen Parties for decades to come.

My lunch of homemade vegetable soup is calling me.  I shall be my very own Souper Trooper and enjoy every delicious mouthful. That’s a really bad pun. Even by my standards and I do apologize.