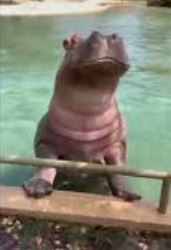 This video is a wonderful example of me in the sea today. As I tried to exit gracefully from the sea the waves took me down and dressed me in seaweed. I looked like a Halloween seaweed monster. The reason that I was at this particular bay was because somebody had told me that there were lots of seals and I was desperate to meet one.

For some reason I think that I am a marine version of Dr.Doolittle. I believe that I could possibly make friends with a seal by playing and stroking it. My delusion is not completely unfounded. I have in the past had a few experiences with marine life beneath the waves as I am a scuba diver.

Once whilst diving in Oman a turtle took an interest in me and we swam around the reef together for what must have been at least 10 minutes. It really was the most incredible experience.

I have stroked a giant moray eel called ‘Freddie’ in the Indian Ocean as I was completing my advanced PADI scuba diving course in Fujairah, United Arab Emirates.

He lived in the funnel of an old wreck and was very well known to all of the seasoned scuba diving instructors in the area. We were about 100 feet down and when he popped his head out of the funnel.

I will never forget when he opened his mouth when being stroked as there was an incredible white honeycomb structure at the back of his throat.

I will head back to the same bay and see if I can seal the deal by making friends with one. Wish me luck.