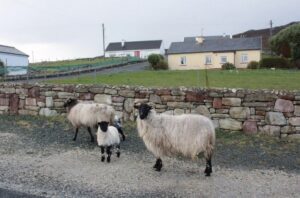 The boot was packed with mostly swimming gear and our excitement was palpable. We drove on our merry way across the beautiful Isle of Ireland to the magnificent Achill Island off the coast of County Mayo.

It is a 4-hour drive, 300 kms to be exact with only 75kms of motorway which came as a surprise to me. As I like driving but I also like the motorway.   Long winding country roads are ok for 20kms or so but 225kms of country roads was not ideal. However, it was worth it. Overall, the drive was not to baaad.

When we arrived, we were greeted on 3 occasions by sheep either crossing the road or gazing at us from the middle of the road as if to say ‘What are you doing on my Island and on my road?’.

I very quickly realized that we needed to adjust our watches from GMT to AST (Achill Sheep Time) which delighted me.  There were baa-ewe-tiful ( beautiful) sheep everywhere.

On one of the days, they raised the baa-r (bar) by simply sitting down in the middle of the road.  I was baa-fled (baffled) but baa-sically (basically) decided to enjoy the mindful moment that I was being given.   We were on our way to buy groceries for a Baarbeque which later was cancelled due to rain.

Later that night I didn’t need to count sheep to go to sleep.    All I had to do was imagine all the lovely ones I had encountered throughout the day.