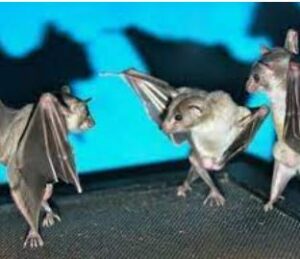 How cool are these bats?   Who knew they could shimmy the way that they do?  I can’t help but feel that they all look a bit smug.   Maybe because they don’t have Covid and are hitting a night club during lockdown?  If they are courting does the female bat, bat her eyelashes at the male bat? Just sayin.

I had to research the term ‘Batshit crazy’ as I can attest to being partial to this state of mind at times. Apparently, it comes from the old term ‘bats in the belfry’.

A belfry housed the bells at the top of a church.   As bats use high frequency sonar, they are highly sensitive to sound and would never reside in a belfry where the bells were working.

Subsequently uninhabited belfry’s often housed bats, therefore the saying would intimate that there was nothing going on upstairs.ie. the bells were not working.  ‘Batshit crazy’ goes one step further to describe the abandoned belfry as being coated in batshit.

Perhaps somebody doing the moonwalk around a park whilst walking their dogs could be described as ‘batshit crazy’.  Or doing the ‘bend and snap’ move from Legally Blonde whilst picking up their dog poop (I have mentioned these scenarios in previous blogs) could also be described in the same way.

Either way I insist on embracing my crazy as I believe it is the best part of me. Mediocrity can take a hike.