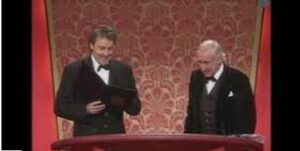 God rest Mr. Milligan and the best acceptance speech ever.  I am sure even Prince Charles had a giggle when he referred to him ( affectionately ) as ‘The little groveling bastard’.    This must be the very first and last time that he was called that.     Acceptance speeches can be so boring at times particularly when they are used for political gain.

Opinions differ on whether awards ceremonies should be used as a platform for a celebrity’s political agenda.    Possibly the most famous one was when in 1973 Marlon Brando refused his award for  ‘The Godfather’ in protest of the treatment of native American Indians by the American film industry.    Sacheen Littlefeather spoke very eloquently on his behalf.   However, she was booed off the stage.   Brando was way ahead of his time in representing people that were marginalized.

Ricky Gervais has to be the King of presenters at The Oscars.   No one is safe. He roasts everyone regardless of whether they are Hollywood royalty or not.  In the spirit of writing about the Oscars I have penned my acceptance speech for my screen writing Oscar. Here goes

‘ I would like to thank my parents who made me and are no longer on this earth. They had a job raising me as I was a cheeky little minx. That dreamcatcher  ( a salutary nod to the native Indians )  I bought has paid huge dividends. I have dreamt of this moment every year since I first watched the Oscars. Thank you all for being my heroines and heroes growing up’.

I will need to pen another one for my best actress award. Just putting it out there.