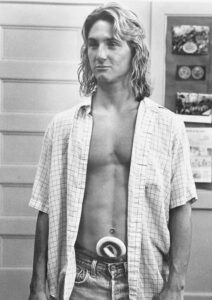 How cute is Sean Penn in this photo? I realize that the word cute is not normally associated with Sean Penn.  But hey I am a gal who likes to live on the edge…… Come and get me Sean if you think you are hard enough.? Well. Actually. You are. Well Hard.  So please accept my sincere apologies for calling you cute- if you are reading this. Which is highly unlikely. But there you go.

He has quite the acting chops and is of Russian, Lithuanian, Irish and Italian descent. His father was an actor and director and his mother was an actress.

Sean Penn is the 9th person to win 2 academy awards. His first was for Best Actor in ‘Milk’ and second for Best Actor in ‘Mystic River’. He has directed one of my favorite movies ‘Into the Wild which has a massive cult following. And most famously was married to Madonna.

WPA – Woeful pun alert-   When it was not in ‘Vogue’ to date famous pop stars they were an item.  She was certainly not a ‘Virgin’ when they met and always claimed their relationship success was due to her ability to ‘Express herself (yourself)’.  They were ‘Borderline’ obsessed with each other and were married from 1986-1989. 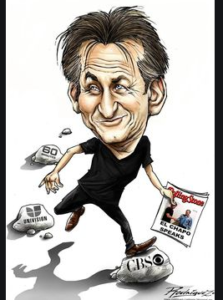 He is famous for being serious and quite a ‘hard man’. I had difficulty finding any funny facts about him.  I had hoped that maybe he had appeared on Sesame Street but nope.  All I could find was that comedians love making jokes about his serious nature.

Such as ‘Neil Patrick Harris, Eddie Murphy and Sean Penn all walk into a room.  No one laughs until Sean walks out’. Another comedian claimed that the US had sent Sean Penn to interview Putin.

My claim to fame is that I was standing behind Sean Penn and his then wife Robin Wright at a theatre in New York in 2002.  The previous week I had watched ‘I am Sam’ with my nieces and we had all cried. He was magnificent as was the movie.

I decided to tell him so. Not in so many words. But I did say that it was superb. and thanked him. I will always remember his aura. His presence and charisma fill a room.

Oh, and he is also famous for his political and social activism. And founded the J/P Haitian Relief Organization following Hurricane Katrina in 2005 which at one time ran a 55,000-person tent camp. What a man. He could never have appeared in Games of Throne. The Penn is mightier than the sword quip would have been woeful.