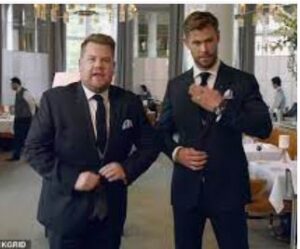 I have such admiration for James Corden.   Like Matt Damon and Ben Affleck in Good will Hunting he co-wrote the hugely successful series ‘Gavin and Stacey’ with Ruth Jones which went on to win many awards. They both desperately wanted to act but no one would hire them, which is why they created their own show.

It just goes to show that necessity is the mother of all inventions or in this case creativity.  From then on, he was the presenter for ‘A league of their own’, a brilliant sports quiz for many years as well as starring in movies.

Being the host of ‘The Tonight Show’ in America has brought his talent and humor to worldwide acclaim.   His ability to laugh at himself is what is most disarming.   Anyone that can do that is a hero in my book.

This was his inspiration for ‘Car pool Karaoke’ which has gone onto have gazillions of views on YouTube.  He admits to have been in a boyband in his younger days and as such has a real appreciation for all types of music from Pop to Rock.

This clip highlights the fantastic sense of humor of Chris Hemsworth.  Despite being voted the world’s sexiest man and being a mega superstar, he can still take the piss out of himself.