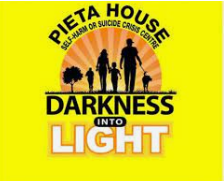 Well. We did it. Myself and a few friends gathered with many others at 05.30 this morning to support ‘Darkness into Light’ at Low Rock in Portmarnock.      My alarm was set for 04.15 to walk Buzz and Finn first.

However, they were not impressed by the gale force winds and the sleet or the fact that I made them wear their rain jackets.  They had all the enthusiasm of constipated tortoises.

I can recall walking them a few months ago in the rain when they had their jackets on.  A rather witty passer by remarked ‘Jaysus they are better dressed than meself’.  At the time I was as embarrassed as I was proud.

When we arrived at Low Rock amidst the hailstones and gale force winds, I began to lose my nerve. Were it not for two other sea warriors who insisted on getting in I would never have done it. It was freezing yet invigorating and the atmosphere was amazing regardless of the weather.

I believe that ‘The Late Late Show’ raised 1.2 million for ‘Pieta House’ from their Friday night show.  In total since March 2020 The Late Late Show has raised over 10 million for different charities which is a phenomenal amount considering the population of our little Island.