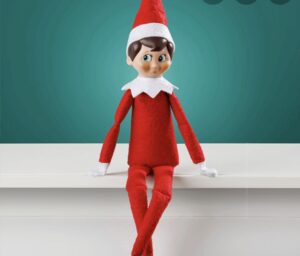 ‘Elf on the shelf’ so there is a sexist statement if I ever heard one? Ouch, that hurt. I just fell off my self- righteous high horse. The feckin elf pushed me.

According to its name it must have been female and unmarried. It’s just as well that reports now confirm its elopement and betrothal. I am looking forward to the renaming ceremony where ‘on the shelf’ will be removed.

My sources have also confirmed that it will soon be publishing a tell all book to reveal the squalid and oppressive conditions of its employment for the last many years. This will be a full expose where details of torture such as being stuck to a toilet overnight will be revealed. Staying awake overnight in a fridge and suffering hypothermia as a result are also experiences that the Elf would rather forget.

Apparently, Santa was unaware of the Elf’s dreadful experiences. The Elf did not want to risk being the whistle-blower.  ‘Martin Bashir’ will be airing a panorama interview with said Elf on Christmas Eve where every detail of its torturous life will be discussed. There are rumors that it will be retiring in 2021. Elf has suffered from COVID this year following double pneumonia caused by hypothermia.

For now, we are unaware of who The Elf married. But rumors abound that it may be Rudolph.  If this happens Christmas for 2021 will be in serious jeopardy as Santa may well be down two of his most loyal staff.