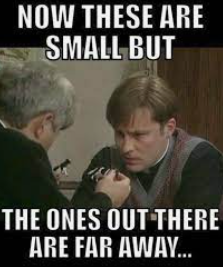 I was swimming in the sea a few days ago and was watching a boat out at sea. I had a ‘Near, far’ Father Ted moment as I was unable to figure out how big the boat was.   It was far away and yet it seemed big.  Which was why I was perplexed.  This video then popped up on YouTube to remind me.

I have mentioned Grover from Sesame Street in my blog before and as a true fan I felt the need to mention him again.  As I do not have children, I am unfamiliar with the programmes that they watch now.  When my nieces and nephew were younger ‘Barney’ and the ‘Teletubbies’ were all the rage.

I still feel that my generation were spoilt with Sesame Street, The Muppets, Wombles of Wimbledon, Bosco and Bagpuss.  Apparently, the names of some of these shows have different meanings nowadays.  If you are called a Muppet nowadays it is invariably because you are not very bright.

RCJA (Rude Crap Joke Alert-) What do you call a Teletubby with his finger up his bottom?