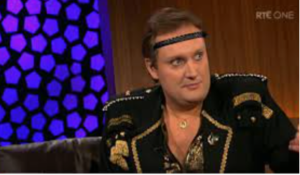 ‘Not 2 potatoes to rub together’.

This video gets me every time.  Mario taking the piss out of the Irish on The Late Late Show. His Michael Flatly impersonation never gets old.  Whenever I see a presenter failing to keep their composure due to an attack of the giggles it makes me chuckle.

I love saying to people on occasion ‘To be sure, to be sure’ when I am asked a question. Purely because some people around the world actually believe we speak like Milo ‘O Shea from ‘The Quiet Man’.   A movie that was made in 1952. Even back then nobody spoke like that. They must have hammed it up to appeal to our brethren across the pond.

We don’t say ‘Soft day, Thank God’ either. And if we, do it’s with more than a hint of irony.  The fact that this clip has been viewed almost 2 million times fascinates me.   Perhaps it is being studied by film students?

Anyhoo John Wayne must have been thrilled not to have to do an Irish accent.  Apparently, it’s not the easiest accent in the world to master.   Tom Cruise and Nicole Kidman in ‘Far and Away’ are famous for their woeful Irish accents.

Within the acting fraternity it may well be the kryptonite of accents for most actors.