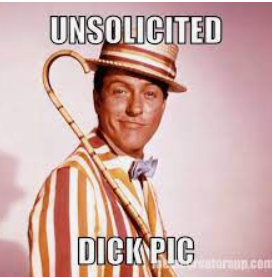 What a man?  94 years young and he can probably exercise better than many half his age.

Mary Poppins and Chitty Chitty Bang Bang are two of my favorite childhood movies. He appears to have lost none of the joie de vivre that he embodied in his roles.   Not only that but he has been handing out cash to homeless people.

I was wondering if parents consider the ramifications of naming their child ‘Richard’, aka’ Dick’.  In the 70’s there was a famous Irish man called ‘Dickie Rock’. How unfortunate is that?

Or perhaps his parents were actually being super clever and guessed that with a name like this he would become famous?   And that obviously everybody would remember his name?

His music was not to my taste but I do recall giggling as a child whenever his name was mentioned.  This was most likely around the time that myself and my friends were looking up rude words in the dictionary.

Nowadays it has been replaced by calling SIRI rude names and asking for the definition of words relating to male and female genitalia?  Or is that just me? Probably……