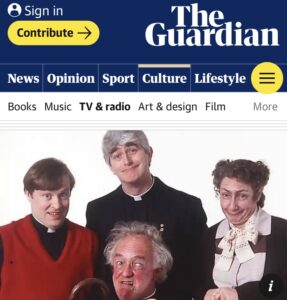 In April this year Father Ted will be 25 years old. The show was a defining moment in Ireland’s history in defining our attitude towards the Catholic Church.  It was a perfect religious satire. Exactly what we all needed desperately at the time.

To this day most Irish people can quote scenes from the series, including myself.   In 2019, Father Ted was ranked 2nd to Fawlty Towers in a list of the greatest British sitcoms compiled by a panel of comedy experts for the Radio Times.

It was written by Graham Linehan and Arthur Mathews, both Irish, and appeared on Channel 4 for three series.   It was produced by Hat Trick productions, a British production company.  I particularly enjoy the following scene as it demonstrates my feelings towards our first Covid lockdown in March last year.

The fact that it features one of my favorite comedians and one of my all-time favorite (most depressing) Radiohead songs is just an added bonus. ‘Exit music for a film’ (The end theme music – hence the name- for Baz Luhrmann’s ‘Romeo and Juliet’) is a masterpiece.

This time last year I was not that worried about the virus but after a few more weeks I began to feel like Father Kevin.   Here’s hoping that over the coming months our spirits can be elevated with the onset of the vaccine.