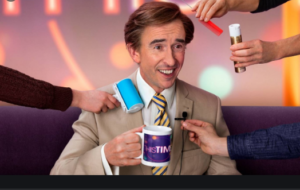 As I was performing a google search today, I was reminded of the comedy of Alan Partridge. The character was created in 1991 for BBC Radio 4 by Steve Coogan and Armando Iannucci.

The show was a broadcasting spoof of English current affairs. Later, in 1992 Coogan and Iannucci hosted a spoof chat show spin off for Radio 4 ‘Knowing me, knowing you with Alan Partridge’. This beauty contest is particularly chuckle worthy.

1.   Inspector dog poop – A park warden doubles up as a dog poop sleuth tracking down the dogs and their owners that failed to pick up their dog’s poop.

2.  Chewing the cud and milking with cows – Watching cows eat grass and then enjoy a documentary examining the complexities of the milking industry.

3.  Not being serious with Siri – Chatting with SIRI whilst saying inappropriate things including espionage type parlance. Just to mess with its algorithms.

4.  Celebrities go shopping – Following celebrities whilst they go shopping to see what they buy.  Then asking them to shop in ALDI for a month to see their reaction.

Let me know what you think?