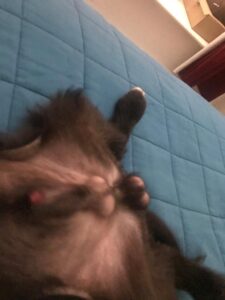 When Finn was a puppy for some reason, he was blessed with two sets of testicles. As we say in Ireland ‘To be sure, to be sure’. Why have one set when you can have two?  I affectionately named him ‘4 balled Finn’.

One day I brought him to the vet and asked the vet why he had two sets and showed him the photo. He said that the second set were not testicles but enlarged glands. I was somewhat relieved yet disappointed at the same time.

It was not that I had any intentions of enrolling him in a freak canine circus (they are very popular in Outer Mongolia) with me bellowing ‘Roll up, roll up, come and see 4 balled Finn ‘. It was more that I enjoyed entertaining the idea that he had two sets when most other canines had one.

He has had the snip and his second set are no more. Some say that a dog can lose some of his character after the procedure but I am glad to say that he is as feisty and affectionate as ever. A proper little cuddle monster. For the purposes of full disclosure and transparency Finn did sign a consent to release this photo considering that it is of such an intimate nature.