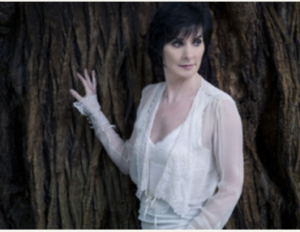 Photo used under Creative Commons from Randy Son of Robert

It was Enya’s birthday the other day.   On May 17th she was 60 years of age. Enya hails from Gweedore in Donegal, Ireland. Whilst I was performing my research, I came across a quote that made me smile ‘Enya’s dialect is garlic’.

Whilst I have no knowledge of Enya’s taste in food, I can only imagine that the person meant to write ‘Gaelic’ as this is the national language of Ireland. Although she may well speak Gaelic whilst eating garlic for all I know. She is Enya and she can do whatever the heck she likes.

Enya has won four Grammys and has also earned an Oscar nomination for the song ‘May It Be’ from the 2001 ‘Lord of The Rings: The Fellowship of The Ring’ movie.

WPA- Woeful pun alert- The following text may contain toe curling disgraceful puns which the author accepts no responsibility for.

‘Enya’ means ‘Woman of the Whales’.  Who knew?   Her mother Orka-strated  ( Orchestrated) that beautifully.   And she also speaks 8 languages.  What a woman? I was thinking of her yesterday when my yoga instructor suggested I try a handstand.   I told her that it was as likely as Enya head banging to Metallica. Although who knows? Maybe she is a massive heavy metal fan……