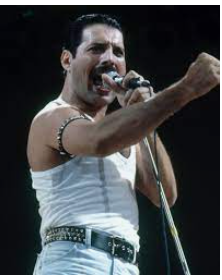 I adore Freddie Mercury and Queen. ‘Bohemian Rhapsody’ is such a masterpiece of rock opera and the movie is exceptional also. Queen and their songs have appeared in my blogs almost as many times as ‘Sesame Street ‘and ‘The Cookie Monster’.  With one of my particular favorites being ‘The Muppets’ singing ‘Bohemian Rhapsody’.   Here it is again for your enjoyment.

I believe that Freddie conceived this song in the 60’s. When he played it to the rest of the band, he explained that he wanted to make it a 6-minute operatic song with harmonies in between.  It broke all the rules and redefined music to this day. Apparently ‘Galileo’ is a reference to Brian May’s love of Astronomy.  He later earned a PhD in Astrophysics.

‘Kenny Everett’ a Capital Radio DJ and friend of Freddy’s played it 14 times over one weekend which added to the buzz and it eventually reaching number 1.  It is officially the world’s most streamed song from the 20th century. Passing 1.6 billion streams.

Adam Lambert was spotted on ‘American Idol’ and went on to become the new front man for Queen.  He is a fitting replacement for Freddy.  But Freddy will never really be replaced as he lives on in his music and the hearts and souls of those that adore him.