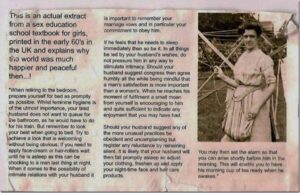 Happy International Women’s Day to one and all.  Although I am sure that there are some folks that ask the question why is there no ‘International Men’s Day’.    And then others who would rather that genders are abolished which is where we are heading anyway. And perhaps this is a good thing.

One of my WhatsApp groups for swimming posted a fella questioning when the Women’s Day would be over as he was starving. He was called a brave man by more than a few due to his temerity and cheekiness.

Another remarked on how the clothes wash he put on didn’t need too much ironing as he had pressed the non- iron program on the machine. He said some of the clothes still needed an iron to be run over them. But that he would like to be acknowledged for his consideration. He received a few comments that are even too incendiary for me to re print here.

We have come a long way. But have a long way to go yet.   Here are some comments from a 1960’s sex education book

‘If you need to apply face cream or hair rollers wait until he is asleep as this can be shocking to a man late at night’.

From Weinstein Gate to the #metoomovement it is clear that misogynistic and sexist attitudes will no longer be tolerated. There still needs to be more women in business and more women on judging panels for awards like the Oscars and the Golden Globes. But we are getting there.