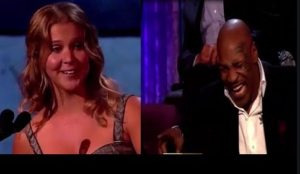 Here is Amy Schumer at her very best. Imagine trying to roast Mike Tyson? In fairness he was the guest to be roasted but I am still sure that most of the guests giving him a hard time had some degree of trepidation as to how their material would be received.

She is a young and incredibly successful comedienne and I wish that we had more of them. Although Melissa McCarthy, Sarah Millican, and Kristen Wiig are amazing. Come to think of it all of the female comediennes on SNL are off the scale funny. Oh, and our very own Eleanor Tiernan makes me chuckle.

In Ireland it would be called ‘A slagging’ as this is how we bring each other down to size. Just in case we have begun to have notions of ourselves.

Zach Galifianakis has a YouTube show ‘Between two ferns’ which is effectively an interview cleverly/ or not so cleverly as the case may be, disguised as a roast. He insults all of the guests and they return the favor.

Apparently ‘The Roasts’ began in USA in ‘The Friar’s Club’ in 1950. Comedy Central has been doing them since 1998.This is the funniest one with Steve Carell.

Donald Trump was also famously roasted. Below are the best bits.