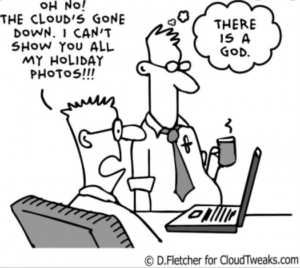 Radiohead- Where I end and you begin

The title of today’s blog is a line from Radiohead’s ‘Where I end and you begin’.    I have been singing it lately as I was hacked last week and have been facing difficulty backing my data in the cloud.   From some reason singing this song allows me to deal with my tech stress.

Radiohead’s songs generally have a de stressing effect on me. Even the most profoundly depressing one like ‘ Exit music for a film’.  My all-time fav.

Hence ‘I’m up in the clouds’. To be honest I spend quite a bit of my time with my head in the clouds but in this instance, I needed to cloud surf forever to try and fix it. The scariest thing about the hacker is that it imitated my virus software ‘McAfee’.

An update alert from McAfee appeared on my new laptop asking me to download a new version of Windows which I dutifully did.   And hey presto, somebody else’s google search appeared when I tried to google something.

What if hackers were philanthropists instead of PC terrorists?   Instead of having your data ruined when you inadvertently click on a malware icon,they would download winning lottery numbers or donate large sums of money to charities?  Just a thought?

Also, why don’t we call them ‘Fackers’ ( a derivative of the Irish ‘Feckers’) instead of ‘Hackers’?