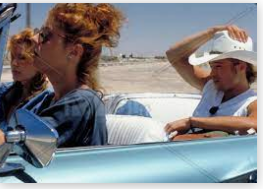 Who doesn’t like a bit of Brad?   Me for one.   If ever I am feeling less than exuberant, I can watch this video and it is guaranteed to cheer me up.   From ‘Fight Club’ to ‘Seven’, to ‘Legends of the Fall to ‘Once upon a time in Hollywood’ my bad mood will instantly be converted to a Brad mood by gazing upon his very fine visage.

It is hard to believe that he started his career so long ago in ‘Thelma and Louise’.  Thirty years ago, to be exact as it was released in 1991.  I don’t think anyone can forget the movie.  Not because Brad was in it but just because it was a magnificent story of female friendship and empowerment with a tragic ending.  As a Ridley Scott film it is up there with the best.   Spoiler alert if you haven’t seen it.

Susan Sarandon and Geena Davis are truly magnificent actresses and both have impressive movie track records to this day.  They were so ahead of their time with regards to the #metoomovement.

Apparently during the love scene with Geena Davis, Brad confessed that his ‘soldier saluted’ as he so eloquently described it in this clip.   Bless.

All Hail Susan, Geena and Brad.