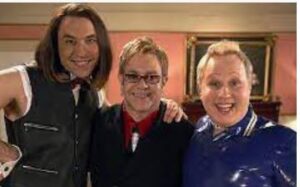 Elton really is a great sport for doing this for Comic Relief and of course David Walliams and Matt Lucas are in top form.  It got me thinking as to what question I would have asked Elton if I was in their position?

Not as good as Matt and David but I’ll keep trying.

Whilst researching Elton’s songs I came across this unbelievable clip.

Apparently, this was parodied to within an inch of its life.   People are still unsure as to whether or not Mr.Shatner was parodying himself.  I will not even debase myself by going for the obvious jokes relating to his name and how the first syllable is the slang past tense of ‘to defaecate’.  Too obvious.    He did however boldly go to where no man has ever been before ( in the world of the spoken word of well-known lyrics) and quite possibly will never go again.

Captain Kirk ( William Shatner) famously said in Star Trek ‘Without freedom of choice there is no creativity ‘. Perhaps he reflected upon his choice of reciting the lyrics to this song when he received the reviews.  And then again perhaps not.

I watched the movie ‘Rocket Man’ last month and it really is a fabulous depiction of Elton John’s life.  It’s hard to believe how he came through all of his addictions ( a dick shun.) Although I think in his heyday, he did admit to finding it hard to shun a dick.