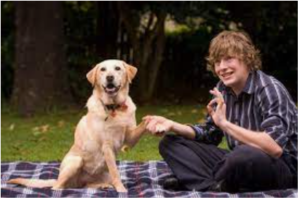 A self-described ‘religious guy,’ he said he could no longer stand the guilt of living with the canine cutie out of wedlock.

But, ‘it’s not sexual,’ he assured the wedding guests.

Honey, dressed for her big day in a white cape, was adopted by her husband five years ago when she was just a puppy.

One afternoon, the pair decided on the wedding during a walk-through Laurel Bank Park.

Spying another wedding taking place, Mr Guiso had an idea.

‘I said “that could be us”,’ he told The Toowoomba Chronicle.

‘She didn’t say anything, so I took that as a yes. He then went on to say that he is mutts about Honey and feels so fur-tunate to have her in his life. Mr Guiso claims that since he met Honey, he has a new leash on life and remains paws-itive in his outlook and impending marriage. According to Mr Guiso, people who hate dogs are re-pug-nant.

When asked if he ever gets tired of all the canine puns, he admitted that they can sometimes become a bit labradorious ( laborious……ok, that one is a bit of a stretch) but that he can see how his actions can be seen as unusual. He had thought of going to ‘Paw Paw New Guinea’ for their honeymoon until he learnt that some of the tribes there eat dogs.

You will finally be put out of your misery with the dog puns tomorrow.