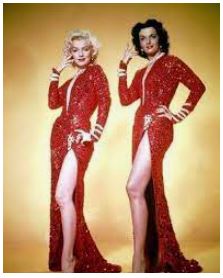 What a magnificent duo.  Apparently, they were very close friends. Jane was a devout Christian and brought Marilyn to one of her services during the making of Gentlemen prefer Blondes.  Marilyn declined further invitations as religion was not for her. However,they remained friends for the rest of Marilyn’s short-lived life.

Jane Russell was a singer as well as an actress. Howard Hughes became obsessed with her beauty and physique and produced her in many films. She resented being typecast and exploited for her looks but was unable to establish herself as a serious actress.

Her relationship with Bob Waterfield was her most successful and she adopted three children. Later she founded the World Adoption International Agency allowing American citizens to adopt children from around the world.

Jane was an alcoholic for most of her life entering rehab at the age of seventy-nine.  She died in 2011 at 89 years of age from a respiratory illness. She was found in her home by her old friend Howard Hughes.

Marilyn Monroe was born in 1926. Her life was not a simple rags to riches story. She had a very strong work ethic and commitment to acting which can often be overlooked.

Marilyn lived with 12 different families as a child and on one occasion was sexually abused by a lodger. Her mother had a history of mental illness and spent her entire life in and out of psychiatric institutions. Against all these odds she went on to become a mega star.