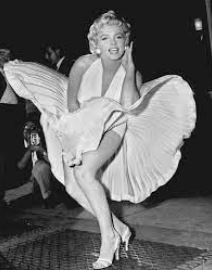 In the beginning Marilyn took every job she was offered for five years and often read the classics between takes in a bid to shake off her dumb blonde reputation.

She studied her photos and always asked photographers for feedback whilst also befriending studio reporters to give her a publicity boost. Stage fright hampered her career even though she took acting classes at the famous Lee Strasberg school of acting.

Later in life she walked out of her contract due to being given demeaning roles. She found her own production studio which she named after herself. Despite her acting classes she suffered from dreadful stage fright.

Hugh Hefner became obsessed with Marilyn Munroe even though he never met her. When she died, he bought the casket next to her for $75,000. Maybe his obsession with blondes was that he was perhaps looking for likenesses to Marilyn in every blonde girl that he met.

In 1952 Joe DiMaggio met Marilyn and they married in 1954.  Monroe famously said that they were drawn together by a need for stability.  DiMaggio disliked Monroe’s sex symbol status.

It was rumored that he often beat her up.  Following watching Monroe shoot the famous grate scene for the movie The Seven Year Itch DiMaggio became incensed with jealousy.  They had a violent fight and Monroe then filed for divorce citing mental cruelty.  They later became friends and he tried to help her with her mental health and addiction issues.