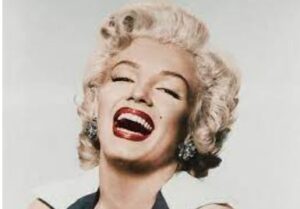 She met her third husband Pulitzer Prize winning playwright Arthur Miller on a movie set in 1951.  Their attraction was short lived as he later wrote in his diary-which Marilyn found- that he was both disappointed by her and embarrassed.  Her mental health had always been friable and she attempted suicide at least once in her life.

Miller said of their relationship that she was a super sensitive instrument to be around and that it was exciting until she began to self-destruct.  He then wrote the play The Misfits where she played the lead role but this character was clearly based on her own personality.

Marilyn found this to be disconcerting.  A month after filing for divorce from Miller she signed herself into a psychiatric hospital for insomnia and much needed rest.

She died in 1962.  Her death was deemed suicide from an overdose of barbiturates.  She was almost 36 when she died.  Miller never attended her funeral. DiMaggio had roses delivered to her crypt three times a week for the next 20 years following her death. The conspiracy theories abound as to whether the mafia or the Kennedys had anything to do with it.

Marilyn was 33 when she starred in Some Like it Hot.   Jack Lemmon and Tony Curtis co-starred.  To me this movie is pure perfection.  From the story line to the plot twists to the comedy.  Never mind the hilarious crossdressing.

In my drinking days our line was ‘Some like a shot’ before we would order a round. We would then begin to recite some of the lines from the train scene while we were waiting for the barman to complete our order.  So much fun.  So many shots.