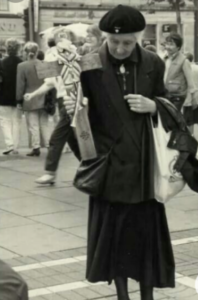 Marion Curran, aka The Crucifix Lady was another of my favorite childhood memories. Whilst crossing O’Connell Street in the 1980’s pedestrians were met by this tall, attractive white-haired lady. Whilst brandishing a large crucifix and reciting passages from the bible she put the fear of God in us all.

Apparently, she would wollop random courting couples with one of her prayer books as they walked past.  One of my friends used to love winding her up by saying ‘Show us your cross’, where she would run towards her being very cross indeed whilst brandishing said cross.

Catholicism was alive and well in Ireland in those days. Every house had a ‘front room’ and the ‘good delf’ that were solely reserved for any visiting clergy.      Priests and nuns were treated like the pope himself.

Such was the efficacy of the church for imbuing the fear of God in us all. I was told that ‘The crucifix lady’ was one of God’s female apostles and I believed this.  Like many young girls I harbored a notion of becoming a nun myself but after a few years of divilment and mischief this was soon cast aside.

Going to Mass and confession was a weekly occurrence.  I can recall wracking my little brain for things to say to the priest once I got into the box to tell my sins. The irony was that in not being able to remember any sins and making new ones up that I was committing another sin. A true case of damned if I did and damned if I didn’t.